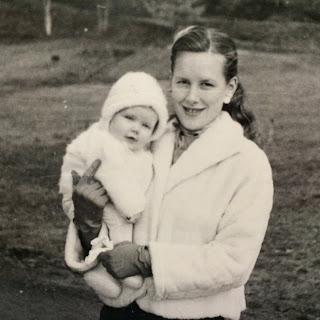 This is my twenty two year old Mum and I in Norway in 1956. Mum was an Australian nurse who married a Norwegian carpenter who had come to Australia in 1951 to work on the Snowy Mountains Hydro Electric Scheme. They met at a dance at the Burns Club in Canberra and were married a few months later. 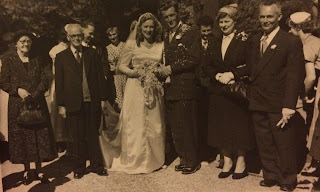 Then they set off to Norway on a long cruise. Once they arrived they lived with Dad’s parents at a property called “Nerdal” in a place called Dalselv in northern Norway, just south of the Arctic Circle. Dad is the youngest of ten siblings and he had a huge family in the region around Dalselv.

I was born in the nearby town of Mo i Rana in March 1956. Mum was forced to learn Norwegian fast as very few of my father’s family spoke English, and his parents certainly didn’t! 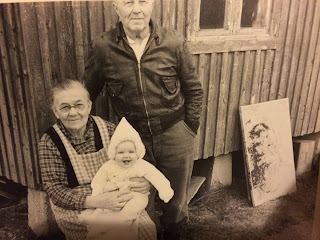 In September 1957 my parents brought me on a long cruise to Australia on the Orcades. 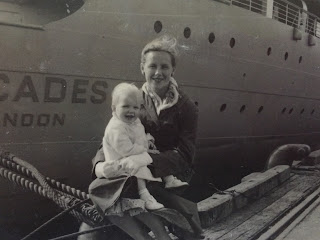 We settled in Deakin in Canberra where my mum had not only her parents but her seven siblings. Dad’s brother Reidar also lived in Canberra. He had come to Australia in 1950 also to work on the Snowy.

Once I was a bit older Mum returned to nursing doing weekend night duty so Dad could care for me on the weekends while she worked and slept. 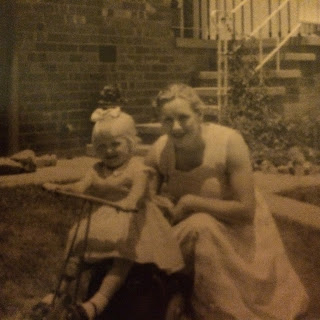 Mum’s only been in heaven for just over six weeks now so maybe I need a little more time to sort my thoughts and her photos and I’ll get back to this subject when I have.

For those of you who have a mum earth-side; call her, write to her, visit her, take your kids to see her, send her flowers for no reason at all and if you don’t speak to her and haven’t seen her for years, bridge that gap while you can. Life’s too short, and there are no phones in heaven and plenty of time for regrets here. Elizabeth Kubler Ross referred to “unfinished business” to do with death and dying. Just a tip from me. Make sure you don’t have any. Then your loved one really can rest in peace, and so can you.

Love and hugs till next time.

Life Changes, all the business of life.

Hi everyone! I can hardly believe it’s almost two years since my last post here! So much has happened in that time that it seems more like ten years than two! It has been a time of blessing, tremendous loss, and yet more undeserved blessings. 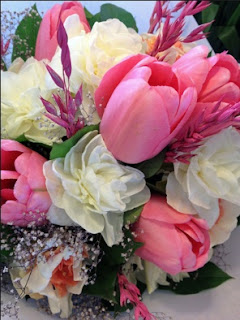 Two years ago life was quite simple. I was happily single. I had three girls left at home aged 30, 19 and 11 and three other adult children living independently as well as four precious grandchildren. I was running my small bed and breakfast in my home and enjoying being a foster carer, mum and Nanna. I had good friends who were more like family. Life was good, but were they storm clouds on the horizon? 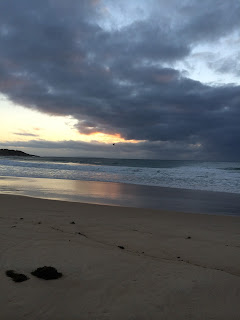 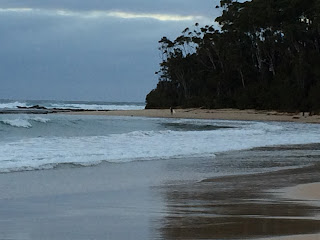 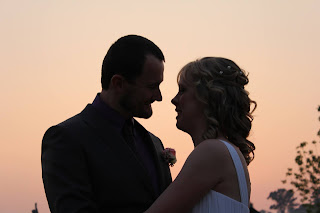 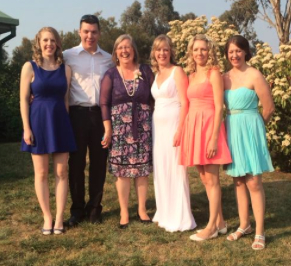 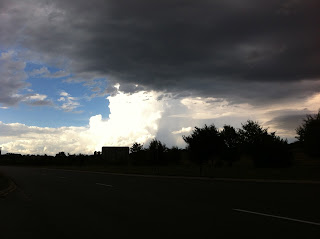 I can’t share details here, this is far too public for that, but the “storm” hit quite unexpectedly with a mighty vengeance and my world was turned upside down. Life as I knew it ended, and a whole new world of painful truth descended like a black cloud.

I had been betrayed in the worst possible way, by someone I considered part of my family although they were not a relative. In the midst of this storm I found myself having to stand up for what I believed in more than ever before and the cost was great.

Such a cascade, no an avalanche of painful feelings mixed with old memories raced by and through me, everything I had believed about the person involved now coloured by the facts and under a fresh light, the light of truth and reality. Harsh reality.

I clung to my faith like a baby koala on it’s mother’s back. The path was a rocky one, to say the least. I have always believed implicitly that all things work together for good, but this was a real tough test and at times I wondered if I would pass. I wondered how life could go on, but of course, and thankfully, it did.

Sadly, I lost some friends, dear friends of thirty or more years. That was so hard. I don’t believe it will ever stop hurting. I had to learn the hard way that not everyone wants to know the truth, or thanks you for sharing it with them. In fact some will despise, abuse and reject you for having the sheer audacity to love them so much that you want them to know the truth regardless of the personal cost to me in sharing that with them.

I still don’t understand why God fearing people refuse to accept reality when the evidence is overwhelming and irrefutable. I will leave that with them, cause the truth is the truth even if I stand alone in believing it. Never be afraid to stand alone with the truth, there is strength in trusting God and leaving the people you love in His hands. We cannot change anyone except ourselves and that only by God’s grace and our own willingness to humble ourselves and trust God when we can’t see the way ahead or even if there is a way ahead. 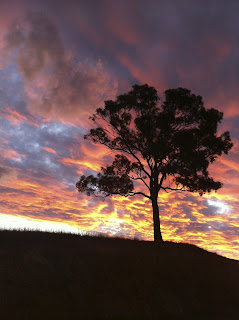 When the worst of the storm has passed you can choose to stay stuck in the pain indefinitely or move forward, yes, indeed, propel yourself however unwillingly into the future. Being proactive takes sacrifice, you have to sacrifice the temptation to freeze and be totally immobilised by grief, loss, fear, guilt and pain and choose to have the courage and faith to put one foot in front of the other, forward, always forward. I found my way forward, somehow, and made some big changes in my life in my effort to reclaim the future and have a fresh start. 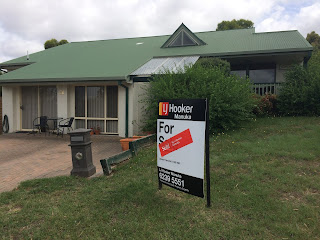 I sold my home of almost eighteen years, retired from my bed and breakfast business and bought a new home, much smaller and newer only 4kms away. 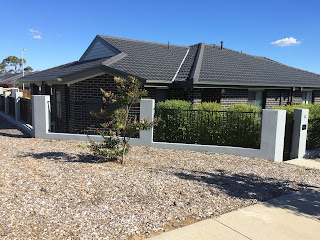 Life goes on and so here I am, blogging again and looking back at the changes and the choices I have made and marvelling at God’s hand in it all. Without my faith I would no doubt still be stuck under that black cloud without hope but I’m not. I have grown and I have changed and I am stronger for it all. I found courage I never knew I had, and that has to be a good thing. I am thankful for God’s grace and the peace He has given me along with that courage. Most of all I thank Him for giving me hope and showing me a new future. I moved into my new home with just one little one (she’ll be 13 in October)  on January 8th 2015. I couldn’t have imagined what He had in store!! Beauty for ashes..... 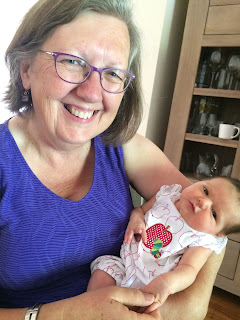 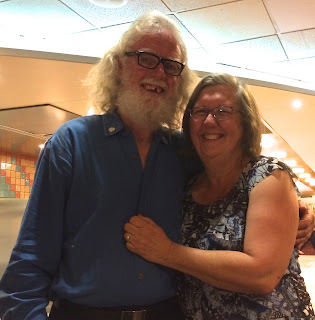 It’s a long and lovely story but here’s the short version. George and I had been friends for a while and on my birthday at the end of March he proposed and I said “yes!”. We are getting married on November 21st this year. Who knew my life would take this marvellous turn? Not me, my classic line when anyone asked me about dating or marrying again was,  “no vacancies, not hiring” ;) George changed all that and I couldn’t be happier!!

and then along came.....
Eli Samuel 3rd of June 2015
darling little son of Zoe and Jared,
my second grandson and sixth grandchild! How blessed am I!!! 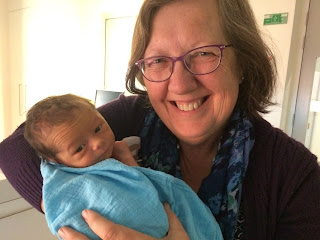 So I think that’s enough for one blog post after such a long absence. The next post will be soon, I promise ;)

Thanks for being here for me and I know you will understand why I’ve been missing in action for so long. 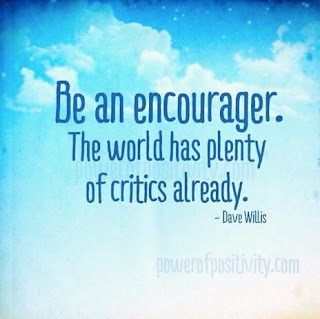 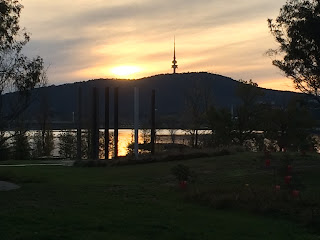 The Sad but Hopeful Lesson of a Little Lamb

My dear friend Maureen is a farmer's wife and she encourages her husband to bring any rejected or lost new born lambs into the house and she loves on them and mostly they grow big and strong in the warm house with the showers of food and love.

On Friday I met the newest little lamb and was in awe of how small she was and how much she needed the love, warmth, food, security and protection of a mother. Maureen provided that, as she always does so willingly, feeding through the night and never complaining, as she did with her own children. One full grown Timmy lamb and a smaller Rosie lamb graze outside her door, living evidence of what love can do.

This one was named Sally lamb. We all hoped and prayed she would grow big and strong and join the other foster lambs outside. Sadly, that was not to be. Despite all of Maureen and her family's love and food and warmth, she died last night. Maureen is very sad, she did everything she could to help Sally stay alive, and yet it wasn't enough.

I see us all as little lambs like Sally. We are vulnerable and weak and so much in need of unconditional love, warmth, food and security. Maureen personifies that kind of love to me; by her self sacrifice, by her unconditional love and by her generous caring and uncomplaining ways. Despite that love, little Sally died. Unlike us, Sally had no say in whether she lived or died.

Little Sally's death made me sad too, but I found hope in little Sally's sad story, hope for each one of us,  each one Jesus' little lamb.

When I was a child I learned a hymn at church, and each little lamb that Maureen lovingly cares for reminds me of it. Each little lamb reminds me of us. His lamb, that He sacrificed His life to save. Do you know how much you are loved by the Shepherd of us all? Could you be Sally lamb, or Timmy or Rosie? You choose. I pray you choose life. 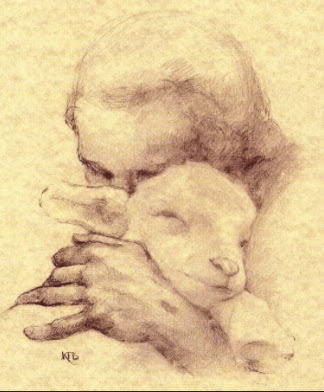 1. I am Jesus' little lamb,
Ever glad at heart I am;
For my Shepherd gently guides me,
Knows my need, and well provides me,
Loves me every day the same,
Even calls me by my name.

2. Day by day, at home, away,
Jesus is my Staff and Stay.
When I hunger, Jesus feeds me,
Into pleasant pastures leads me;
When I thirst, He bids me go
Where the quiet waters flow.

3. Who so happy as I am,
Even now the Shepherd's lamb?
And when my short life is ended,
By His angel host attended,
He shall fold me to His breast,
There within His arms to rest. 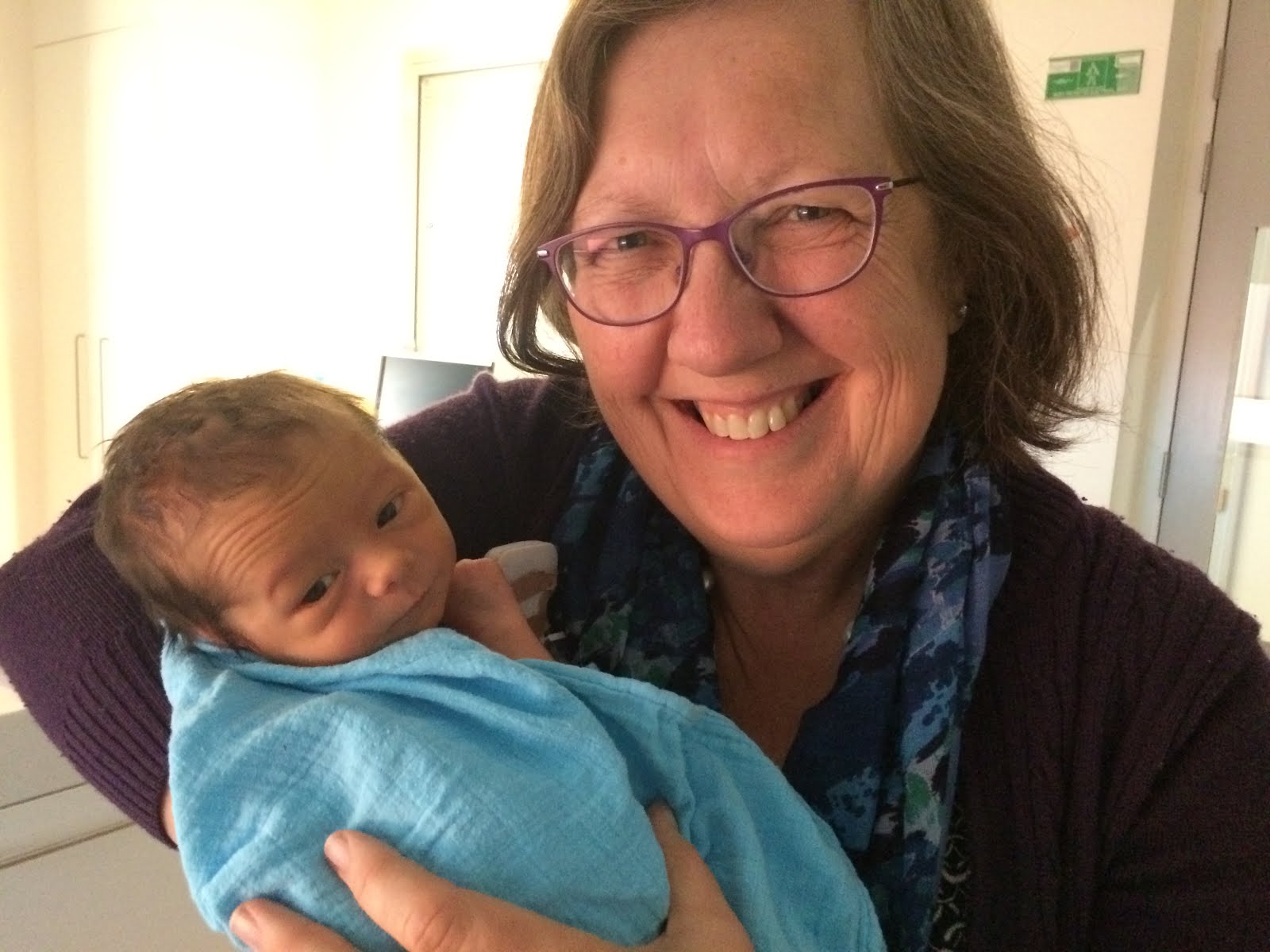 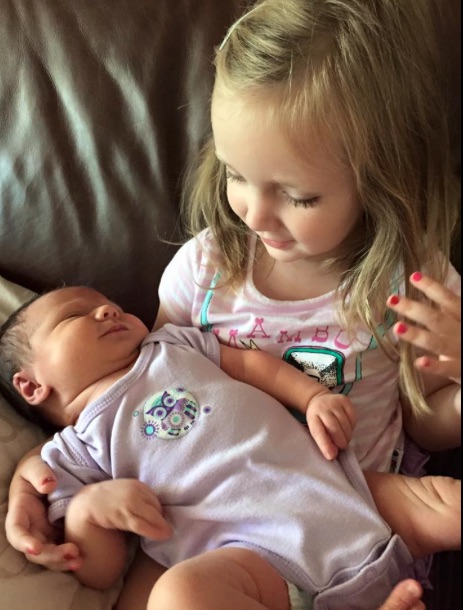 Zoe and her Jared on their wedding day 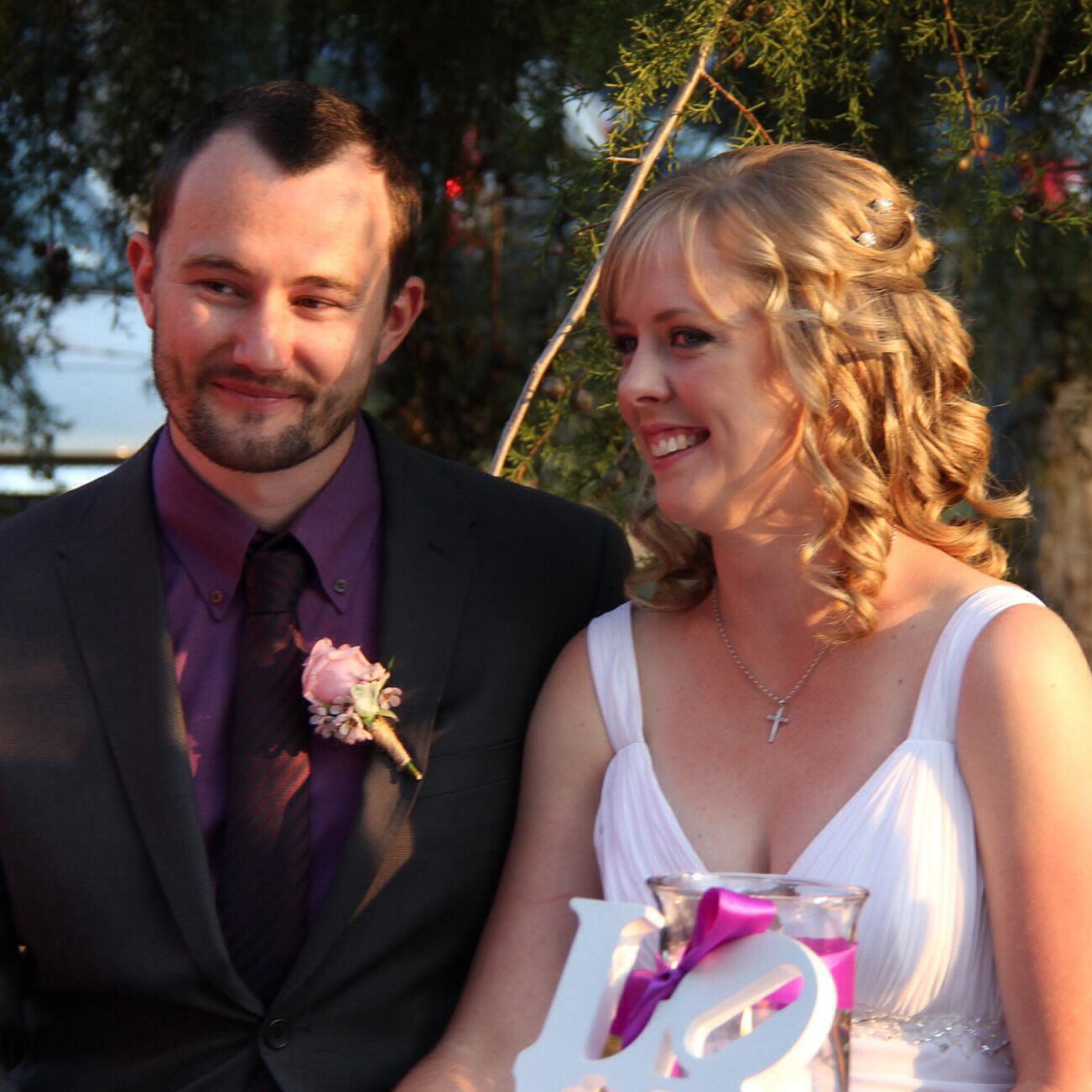 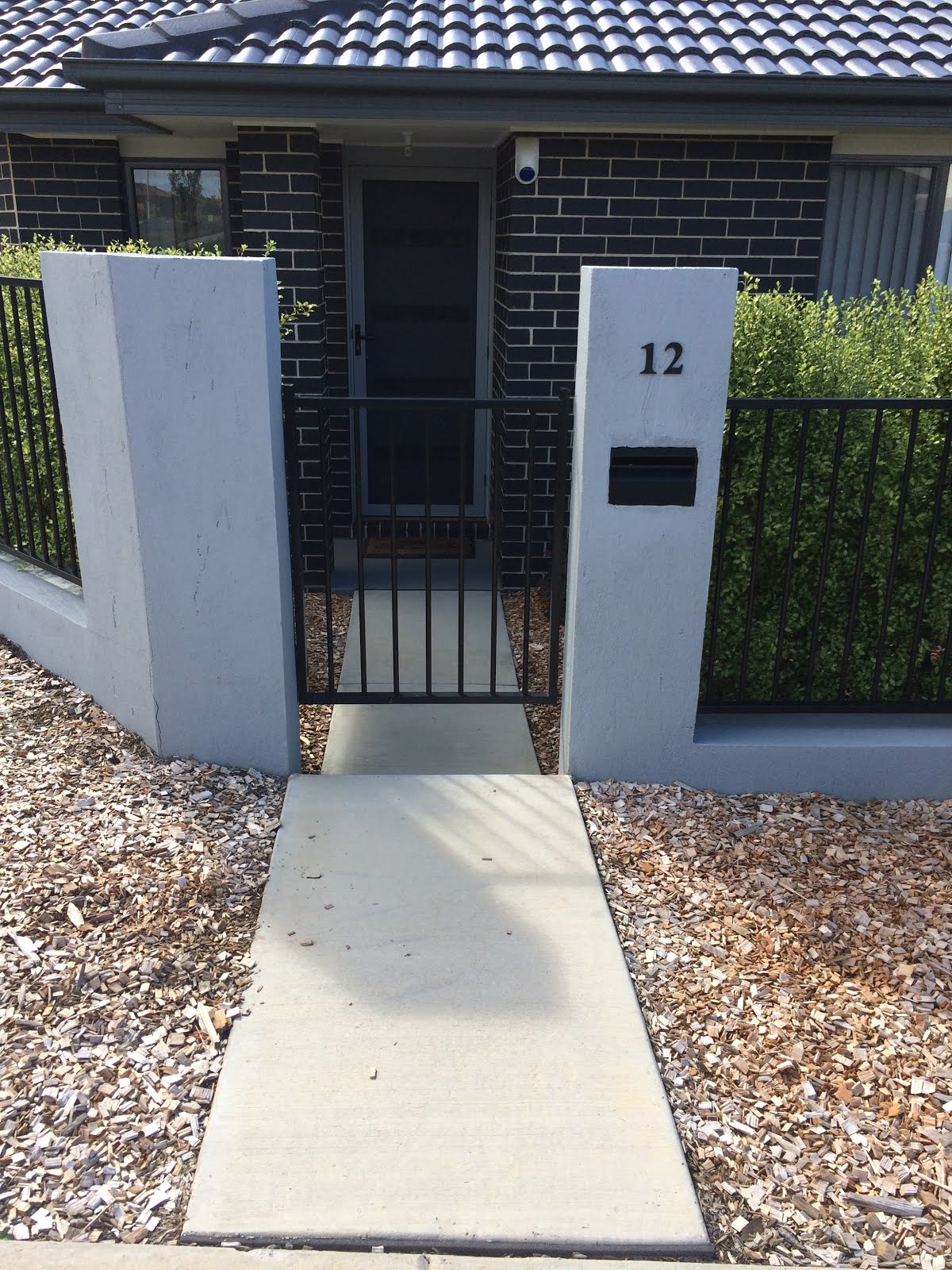 Lynn
Canberra, ACT, Australia
I am 60 years young and love my life, most of the time anyway ;) I have four adult children plus two foster daughters and six precious grandchildren. I am married to George after being a single Mum for ten years. We married in November 2015. I live with George and my thirteen year old special needs foster daughter, my fourteen year old chocolate Burmese cat and one cheeky nine year old Jack Russell terrier. I am blessed with a close loving family here in Australia and a big extended family all over the world. I was born in Norway like my Dad, so I have many, many cousins over there and some I have only met online more recently in the USA. Thanks for reading my blog today. I apologise here that I am not a regular writer. I have the best of intentions ;) Bless you!

16 "For God loved the world so much that he gave his one and only Son, so that everyone who believes in him will not perish but have eternal life.17 God sent his Son into the world not to judge the world, but to save the world through him.